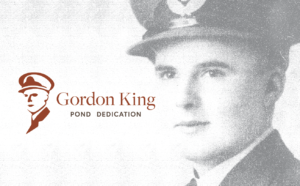 SEVERAL ROADS, AND PORTION OF KESWICK NEIGHBOURHOOD TO BE NAMED AFTER GORDON KING

Gordon King, a decorated WWII Veteran, dedicated his time to developing sports programs around Edmonton, and cared deeply for his city will be honoured during the naming ceremony of Gordon King Pond, and adjacent roads King Vista SW, King Wynd, King Landing SW, and King Gate.

King served in the Royal Canadian Air Force during the war. Miraculously, he survived when his plane was shot down over Germany in 1942, only to be captured and taken to Stalag Luft III as a prisoner of war. There, King was part of what’s now known as the Great Escape, thanks to a 1963 movie, helping to dig three tunnels out of the camp. On the night of the escape, King was supposed to be the 141st prisoner to make the journey out, but the tunnel was discovered before he got his chance.

Three years after the City announced that they would be naming streets, and a pond after him, Arbours of Keswick is honoured to host the official ceremony honouring Mr. King as the namesake for their pond, with the unveiling of the finished development.

“We are proud to have the legacy of Mr. King be part of our developing community. As a builder of communities ourselves, we are thankful to him for having served Edmonton and all of Canada in so many different and impactful ways.”  says Russell Dauk, Vice President – Land Development, Rohit Group of Companies

King touched the lives of many people in Edmonton and will be honoured with the presence of his family and representatives of the many groups he served over his lifetime, including the Canadian Military, and the YMCA. Attending and speaking at the event is the Honourable Amarjeet Sohi MP and Minister of Natural Resources, the Honourable Kaycee Madu MLA and Minister of Municipal Affairs, and City Councillor Tim Cartmell Ward 9 Councillor.

The event is open to the public. More information can be found at www.arboursofkeswick.com/gordon-king-pond